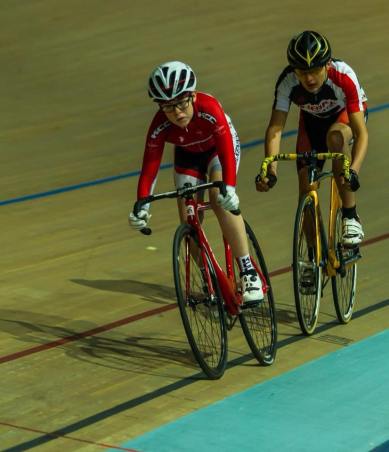 If you were to look up the definition for ‘sports mad’ – you’re likely to find a photo of Flynn Johnson.  At only 14 years young, Flynn already has the distinction of being the Eye Play Sport Sports Scholarship holder for 2018.  The Tandem Project is happy to be working with young riders, and we hope to expand our reach to the next generation of vision impaired riders.  In the meantime we have to share Flynn with cricket, track cycling, goal ball, public speaking, golf, rock climbing, ice hockey, parachuting, race car driving……..ok, some of that might be an exaggeration, but you get the picture.  This is a young man who is making the most of every day and we are excited to help him develop further on the road tandem.

Tandems are never simple – taking the force of effort from two riders takes its toll, and tandems break.  We are enormously privileged to have Tony Kemp as volunteer bike mechanic, who selflessly keeps our fleet on the road after they return to base camp limping.  Between Mike Hoile and Tony, we would have to be paying for repair cost which have previously kept machines off the road.  The latest addition to our equipment base, is a stunning lightweight racing tandem.  The ‘Alchemy’ frame was previously raced as a part of previous Australian track and road campaigns.  It sat for many years, unused and unloved in a bike shop, until it was purchased and then donated to the program by Kieran Murphy.  It has since been rebuilt, with all labour donated by Tony, and the group-set very kindly given to us by our awesome long-time sponsor Ozone Cleaning Specialists.  Thank you Tony, Mike and Ozone for keeping us running, one machine at a time.

This year hasn’t quite gone to plan. At times I have felt like my form has been better a week after a race rather than for the race.  I’ve been sick, injured, or when I’ve been able to replicate good form, something else has come up.  Shortly after returning from Italy for the 2018 UCI Para Cycling Road World Championships, I was on a recovery ride when I felt a sharp pain in my calf/hamstring.  This would eventually be diagnosed with the help of an MRI as a torn hamstring tendon.

Before the injury I was flying!  Consistently riding Windy point in under ten minutes with a new PB of 9:40s with pilot-extraordinaire Mike Hoile at the helm.  Just as the year had panned out though, this form was too late as the Road World Championships had already been raced a few weeks earlier.  The injury would eventually have me sitting on the sidelines, unable to ride a bike for 3 months and counting.  Currently, doctors are hopeful I will be back on the bike in January, and if all goes to plan, I will be back racing in the Road World Cups in Italy and Belgium in May 2019.  Injuries are never great, however it has given me time to reflect on the past few years in the Australian team and offered me some opportunities outside of cycling to keep my head space right.  I am working for Eye Play Sport which is a charity – fundraising for blind and vision impaired members of our community to participate in sport.  I am currently organising a DINNER IN THE DARK to be held February 23 2019.  Rehab is part of the game and I’m excited for a busy 2019!