Posts from the ‘Tour of Adelaide’ Category 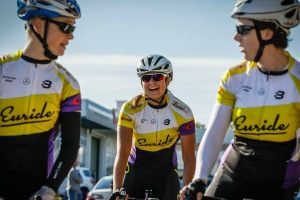 The EMBA Ozone Cleaning Specialists squad again faced off against the Nation’s top Road Series Teams. This time, our top three GC women had the experience of the TDU tucked under their belt. The Tour of Adelaide is also a far better fit for our team in that the criterium component has been eliminated for three tough and hilly road stages and one kermesse.

Stage One was a 72km road race with a goliath set of climbs to contend with; Checkers Hill being the expected boiling point of the race. The race prior to Checkers was in no way uneventful. A crash marred the race at the 35km mark, and took team rider Michele Bloffwitch down. Michele rode bravely from that point forward, well behind the bunch but finishing within the allowable time limit to prevent relegation.

Considering the stage finished in Campbell-town after a scenic deviation over the Corkscrew, it would have been a fair guess that the pace over Checkers Hill may have been more sedate than the pace in the TDU. Alas, it was quicker, and the subsequent photos to flood social media form a gallery of pain faces. The real carnage occurred on the Corkscrew as the hill divided and conquered a field with tired legs. Victoria put all her Crokscrew repeats in training to good use and was installed in the top ten, working hard in a chase group just off a leading bunch. 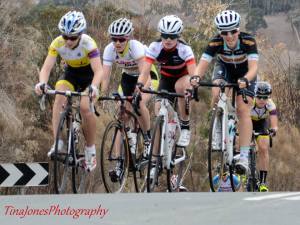 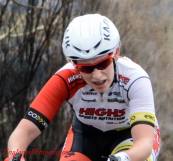 Lucy and Holly had tremendous climbing legs on as well, pulling back significant position on the climb to safely install themselves in a third group. There was chaos down at the finish line with the leaders missing the turning point. Victoria’s group made no such mistake, possibly because by then several people had been allocated to perform star jumps at the corner to ensure subsequent riders did not make the same error.

After negotiation between the Team Managers and the Chief Commissaries, time was given back to the leaders and the leader board shuffled slightly. The end result saw Victoria finish 7th, Holly 15th and Lucy 16th; extraordinary to have three riders in the top 20. The achievement saw the team placed 4th overall on the Teams Leader Board.  Our Data#3 guest rider Kim Pederson finished strongly on a stage not generally suited to her strengths. 55th out of a field of 74 starters is promising for such a hilly stage. Kim’s strength on the flat will be invaluable on the following stages. Michele was tangled in an early crash and had to work hard to finish within the eliminations time, which she did. 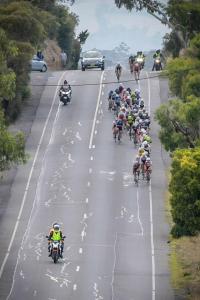 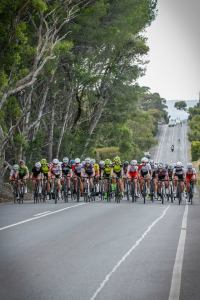 Stage two represented a challenge for legs pushed to their limits the day before. 80km over an incredibly lumpy course was not the only challenge – the road surface along the back section was downright hazardous. What can only be described as a loose surface country road presented serious dramas, not to mention the enormous gum tree dividing the road at one point, and the road divots that bounced riders out of their saddles. Four laps of power climbs was always going to thin the field, and with each lap the riders were being spliced off in twos and threes. Victoria nearly made a critical error in the second lap, positioning poorly at the back of the field as they rounded a corner onto a set of hills. A break went at the front and there was a definitive gap opened up at the mid-point of the field. Victoria now had struggling riders getting in the way of what became a desperate bid to cross the gap. Luckily, Victoria’s max power is well suited for exactly this sort of emergency, and by the top of the series of climbs, Victoria was back up at the front half of the field. Needless to say, the mistake was not repeated. 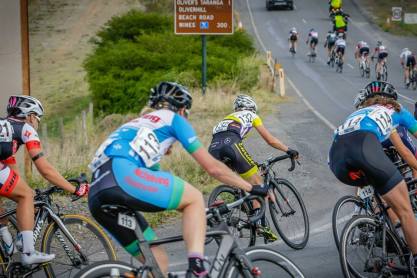 Holly and Lucy were positioning well throughout the race and were generally untroubled by the pace being put on up the hills. It was a skittish stage with three crashes and unfortunately disaster struck for Lucy in the last lap. A touch of wheels in front of her saw a crash that Lucy very nearly got around, but alas, Lucy was clipped on the way through and kissed the dirt. Knowing the importance of time preservation, Lucy literally bounced back up onto her bike and flew after the bunch. Time losses were minimal but saw the team moved from 4th, down to 6th. Holly and Victoria finished with the bunch but Victoria heads into day three having just popped out of the top ten into 11th place. Michele was a withdrawal earlier on in the race, while Kim worked the entire race with a small group to ensure that she finished within the time limit and lived to ride another day.

MacLaren Vale hosted both the second and third stages of the Tour of Adelaide, with stage three involving five laps of a shortened circuit which was no less hilly than the day before. Power climbing was again the main requirement of the day, but the shorter circuit made positioning around the corners even more important. The pace over the KOM point was brutal on each occasion, and just as the day before, riders were being spat under the pressure. The field consistently came back together, as it seemed even the strong teams were struggling to hold a threatening pace after the KOM to force a break. There were no issues with crashes in stage three but the downhill and technical finish was not well suited to our crew. Lucy, Victoria and Holly took the corner a little too cautiously and subsequently lost touch with the rear of the field by only a few metres, but this small gap attracted a five second time loss for each rider. It was enough in the wash-out however, for the team to consolidate 6th place, and for Victoria to move back into the top ten, but with a rider on equal time just behind her in 11th place. Again, Kim was challenged by the hilly terrain, but just as she did the day before, she worked diligently after being dropped to finish safely within the allocated time.

Stage four can only be described as a baptism of fire, with the Tour of Adelaide returning to the city for a 60km Kermesse around Athlestone. The four remaining riders rode the course for a warm up, and concluded that the impending race was going to be a formidable combination of technical handling and sheer speed. The course included a downhill roundabout, a chicane corner with road islands, and a finishing drag uphill that was probably going to be ridden at warp speed.

The race got underway, and without hesitation, the powerhouse teams turned the race into a hellish nightmare. Their intent was perfectly clear – shell as many riders as quickly as possible. Lucy and Kim succumbed within a few laps, as did much of the field, leaving Holly and Victoria to dig in and fight for survival. Every lap diminished the field. The 62 riders who began the day were halved by lap five, and still there was no respite. Perhaps it was the pressure being applied or the scrapping fight amongst the top teams, but lap 8 saw some of the front runners brought down in a horrendous crash. Victoria stayed clear and rode through the middle of the crash, flying in pursuit of the riders fleeing the scene. Holly was not so lucky. While not brought down in the crash, she was abruptly cut off from chasing by a rider stopping to attend an injured teammate. Holly was left with a desperate task of trying to pursue a flying bunch with a significant head start. Some luck intervened, as a pace car was brought out to escort the peloton on two neutralised laps while emergency personnel accessed the injured riders. It would have been nice if the neutralised laps were subtracted from the remaining laps, but alas, it instead turned the race into a 70km epic. Lucy and Kim had continued to race hard during the commotion, and as a result, they had ridden enough of the race by the time they were removed from the course to be awarded a finish time. This was as important to the team as the fight for Holly and Victoria to finish. Without three riders allocated finishing times, the team would have been disqualified from the teams overall classification. 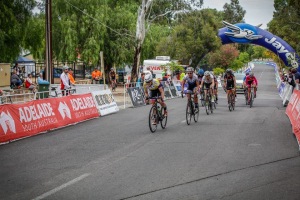 The race was resumed with 8 laps still to race, and the crash hadn’t dampened the aggression of the remaining field. The tempo seemed to be winding up with every lap, especially the charge up the finishing hill. Victoria was marking one rider in particular – the rider sitting in 11th spot who could displace Victoria from the top ten. Victoria finally had a finishing straight that relied on power climbing rather than technical cornering. Half way up the final hill, Victoria pulled out from behind her marked rider and took off alongside of the flank of the peloton. It was then that Victoria realised how fatigued everyone else was, so she kept accelerating until she approached the front of the field. As the field rounded the final corner, Victoria passed a few more riders and then fought to hold her spot, finishing a very satisfying 10th. Holly had also survived the entirety of the race, finishing with the bunch.

To their amazement, the efforts of the team elevated them to 4th overall, edging out the Holden Women’s Team. Victoria finished 8th overall, proving that old goats can race. Holly showed her enormous natural talent in finishing 14th, while the true grit of Team Captain Lucy saw her secure a top 30 (30th) finish. Our Data#3 guest rider Kim Pederson made a gutsy NRS debut to be the final official finisher of the field in 47th with the remainder of the 75 starters being awarded a DNF.